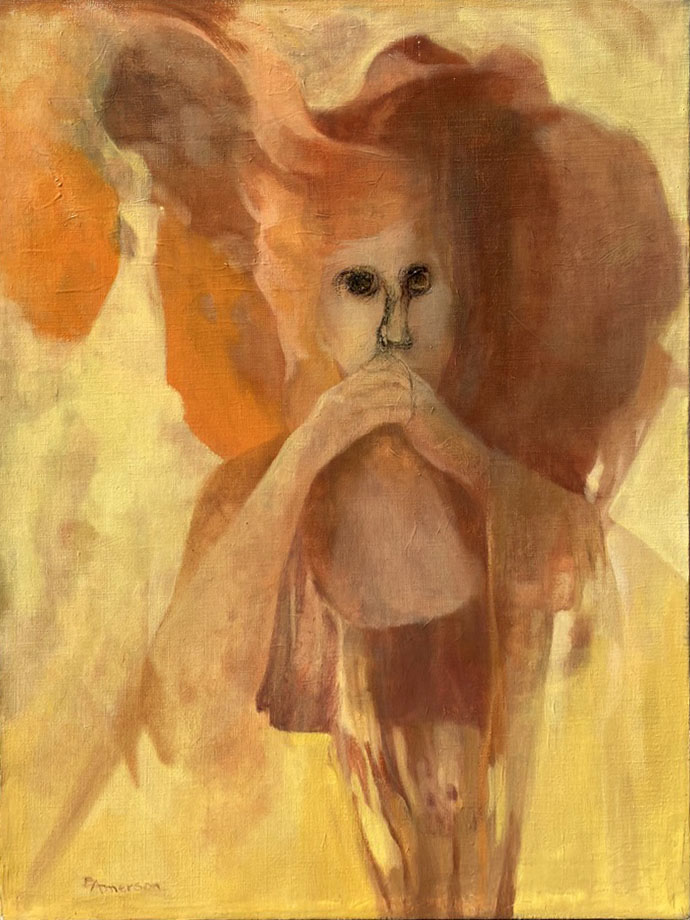 At times visual realty can be disorienting, as edges blur and forms blend into one another. But a blink of the eye can clear away the haze, and sharp differentiation results. Betty Amerson’s work seems to be a captured split-second of time between that blur and that blink. There is a conscious fusion of visual and subliminal elements in Amerson’s work that she labels “mystical realism.”

“I don’t think I could enjoy life without imagination,” she says of her need to paint. As a result, perhaps, an Amerson painting is allowed to grow spontaneously yet at a slow pace. There is a freedom to it. Her forms begin and are developed in process, not hampered by a rigid, predetermined composition. She works out her ideas in sketches, with pencil or charcoal, but these are not maps to follow; they are not directly related to a painting either: they are just prompters.

Space in an Amerson is not specific and often seems aerial. “I like things that are flowing, weightless,” she explains. She likes to draw with cerulean blue or burnt umber thinned with turpentine. Sometimes she tones areas of a fresh canvas and then draws into them. A new painting might begin from any of a number of stimuli: a whole composition can be triggered by a color harmony seen or imagined., or a still life might grow as she moves around, picking up interesting things.

Though she mentally groups them, she does not make a setup to use as a model. “I would feel stilted by a formal arrangement.” she says. She draws partial things and composes them directly on the canvas. In an Amerson, nearly equal importance is given to negative and positive spaces, so there is an ambivalence as to which is which, image or ground. Betty Amerson’s favorite motivation stems from an imaginary human figure in strange surroundings; from such elements, she creates a sense of an impending event.
“Man in nature is no more important than his surroundings. He is a part of nature,” she believes. The human form appears and disappears in a number of her paintings, melding into other forms that relate to natural things: a tree, a cloud, a rock. Although she has painted portraits on occasion, her more freely created compositions are far from likenesses. They are human suggestions, thought-provoking largely because the viewer can’t help but recognize the shapes as people. For most of us, the human form is the one that captures our interest instantly, as we identify with it most easily.

For an oil, Amerson requires the minimum of equipment. A few brushes, several tubes of paint, a disposable palette, a bottle of copal medium, and some turpentine together with her easel and canvases are sufficient. The panoply of “artist at work” is missing. Her low-key approach is modest and unassuming.

Amerson’s first strokes on a fresh canvas are sweeping direction lines, made in response to a spontaneous feeling. Over this linear network, in a combination of cerebral and instinctive reactions, Amerson both directs and responds to the forms in her painting.

She is always aware of balances and design elements. These requirements of composition lead toward a growth of identifiable shapes. At the confluence of line and mass, she seeks images. As one form occurs, another can be developed in relation to it. This is the pattern she follows in most of her work.

Amerson constructs her composition on two levels: the image itself is one: fluent lights and darks are the other. These evanescent forms continue as solid or transparent areas on paths of their own, retaining their integrity as they move. Non-actual forms give the strongest sense of motion to a seemingly static arrangement.

What excites her is the reaction of others to her paintings. She says, “I care more about the viewer’s reaction to my work than talking about it. It’s not so much that I want people to feel what I feel. By putting these figures in their unusual surroundings, I’m not trying to distort reality or shock people- but I do want them to think about the relationship of the figures to their surroundings.”

Betty Amerson was raised in Des Moines, Iowa. She married at a very early age and followed her husband, Roy, to San Francisco, where she waited for him during World War II. In addition to working, she also began studying art at the Jean Turner Art School in San Francisco. Her first job was in commercial fashion illustration. When the Amersons moved home again to Des Moines, Betty worked for a time in commercial art until her daughter was born. Then she began a 15-year period of study at the Des Moines Art Center, where top artists came to teach. Faithfully, year in and year out, Betty worked with such artists as Syd Fossum, Farrar Wilson, George Grosz, James Ernst, Arnold Blanch, William Zorach, Kyle Morris, Jean Charlot, Nichola Marsicano, Robert Freimark, Jules Kirschenbaum and Dwight Kirsch. “I started out with pure design and color, but it didn’t satisfy me; yet I wasn’t happy just copying nature either” she remembers. She found a middle road of painting, neither entirely realistic nor nonobjective.

Betty Amerson’s first public efforts were in amateur exhibits. She began winning prizes and soon entered the professional juried shows available to her in her region. Her professional career has grown since 1954. Working in oil, acrylic, watercolor, serigraphy, some sculpture, and drawing, Amerson has developed her career as so many artists across the country have done. Her instruction was excellent; her commitment of time and her intent were serious. A following grew, which led to commissions and sales.

While living in Iowa, Betty entered certain shows repeatedly over the years: the Iowa Annual Artists Show; the Annual Missouri Valley Exhibition of Oil Painting; Mulvane Art Center, Washburn University, Topeka, Kansas; the Life of Christ Biennials, Waterloo, Iowa; and the Iowa State Fair Salon Exhibition, Des Moines. Her work was exhibited in the American Serigraph Show in Des Moines; the 31st Annual Exhibition, Springfield Art Museum, Springfield, Missouri, the 81st Annual Painting Exhibition of the San Francisco Art Institute; and the Hastings College Invitational Drawing Exhibition, Hastings, Nebraska.
To an artist whose career is flourishing in one area, moving elsewhere can be a shattering experience. When the Amersons decided to move to Arizona, Betty knew she faced rebuilding her career. Amerson’s lyrical style has found a reception in Tucson as it did in Des Moines. Without interpretation, the paintings succeed on purely aesthetic grounds; well-composed, modulated and harmonious, they are satisfying visually. Her work has been winning awards in Arizona, where she has had solo shows and rebuilt a network of new contacts. She is a member of the Tucson Branch of the National League of American Pen Women and a state award winner in their biennial of 1973. She is also a member of the Tucson Art Gallery Association, the Tucson Art Center, and continues her membership in the Des Moines Art Center.

There is a steady outward growth in Betty Amerson’s career. With no strident overtones of frenzied ambition, she nonetheless cultivates her career with professionalism and proves once again that there is always a place for an artist who seeks it. Amerson’s art is a private, gentle response to currents of thought widely explored in today’s philosophic climate.

More and more mythless Americans seem to identify with an esoteric view of reality. Life is seen as a series of planes, only one of which is perceived visually. Just below the visual it is believed that consciousness links plane with plane in a constant communication that one is only occasionally aware of.

Betty Amerson’s vision speaks of these multiple realities. To the receptive viewer, her paintings communicate. At their best they are symbols understood by the new mystics. Whether in Iowa, Arizona, or a wider field, the artist who is able to illuminate the thoughts of contemporary society serves it well. Betty Amerson is such an artist. 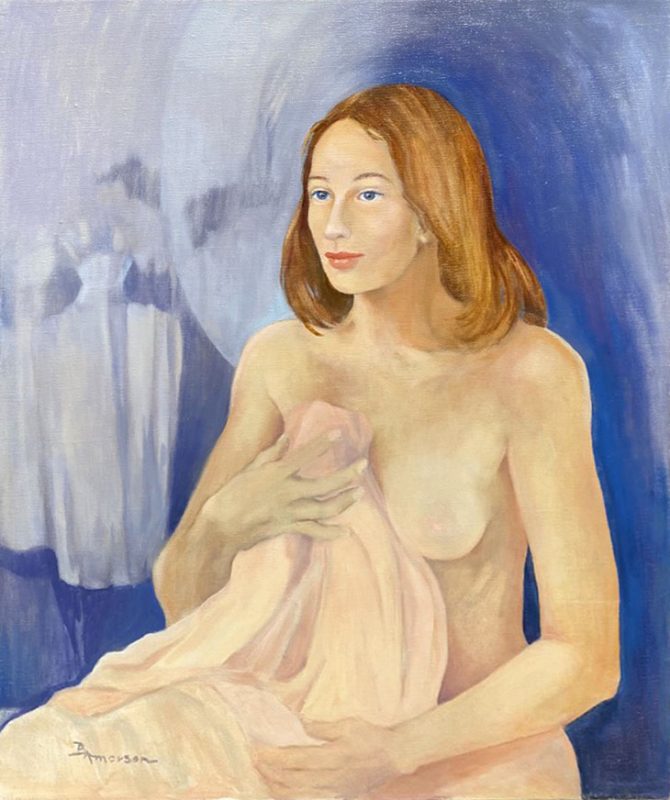 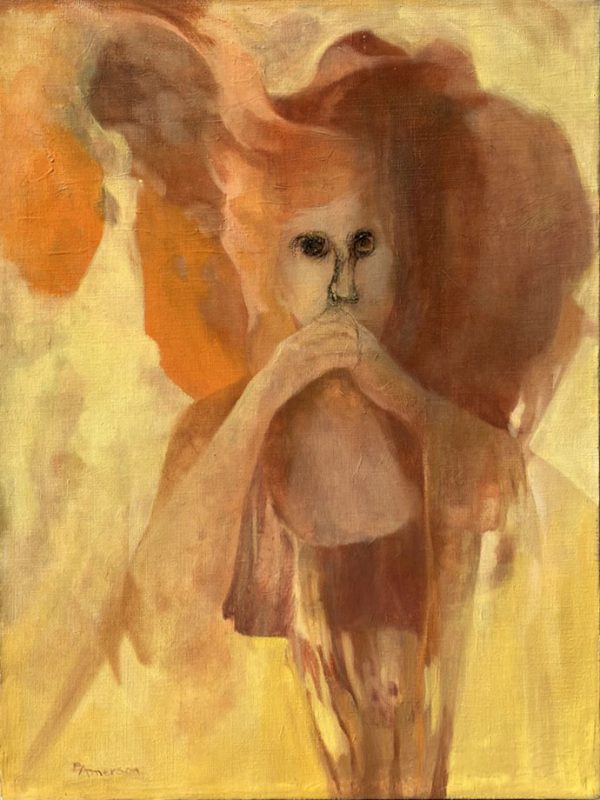 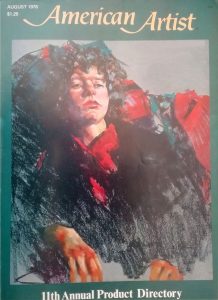