Andrew Peters grew up immersed in nature. His father brought home strikingly beautiful wildfowl and hunting tales from windswept marshlands and prairies. Soon he was tramping autumn fields by his father’s side or sitting in the duck blind sharing the great migration. Those golden days in nature with favorite dogs and men were a key parts of the artist’s education. His mother encouraged his early interest in art and arranged for him to take painting lessons.

Karl Bodmer’s watercolors of the American wilderness came to Joslyn Art Museum while Andrew Peters was a young art student there. John James Audubon’s wanderings and bird paintings had his attention before that. He was intrigued by the accuracy and beauty of their paintings from the wilderness. Andy hoped to become a professional artist or ornithologist. He was mentored in ecology by naturalist Jim Malkowski, as a student, a volunteer, then an employee at Fontenelle Forest Nature Center.
When he was 16 Peters hitchhiked to Canada and roamed the Manitoba lake country. In the Everglades and the Kenai Peninsula he sought new bird species. Immediately after earning his BS degree in wildlife biology at Iowa State University, he began a freelance career painting birds. Then he pursued wider horizons.
Sketching across Africa for a year led to major paintings of game animals resulting in two museum exhibitions. He sojourned in Cusco, Peru, painting among the indigenous Quechua and Aymara people in the Valley of the Inca during an overland trek through South America. As a rule he traveled solo, finding new subjects by reckoning, careful observation, and instinct. “Constant exposure to the unfamiliar thwarts routine and repetition in life and art.” he says.
In 1985 he settled in Santa Fe to seriously pursue American Southwest landscape painting as his primary focus. Working out of a modified pickup truck, he completed hundreds of sketches and paintings onsite. “Painting out of doors is the way to capture the true essence of a place. Birds and other animals resume their ordinary routines around you and a kind of courtship takes place with the subject. It is a chance to feel nature deeply and observe its lyrical beauty and subtle moods. You bare your soul in rapid emotional brushstrokes attempting to capture the fleeting effects of light. It is a profoundly intimate experience in nature.” The landscapes of Mexico, Romania, Spain, Morocco, and Ireland also came under his brush during this time. Museum exhibitions, magazine articles, and commissions followed. He packed horses into western mountains to paint alpine lakes at timberline alongside his artist wife, Dawn. Each fall they returned to the Midwest to visit family and hunt upland game birds and waterfowl — beloved traditions from his childhood.
Peters’s paintings have been exhibited in the Cincinnati Museum Center, the Autry Museum, the Denver History Museum, the National Museum of Wildlife Art, the Joslyn Art Museum, and the National Cowboy & Western Heritage Museum, where he won the Prix de West Purchase Award for “The Lake of Glass” in 2015.
His home Hazel Dell is cradled amid restored bluestem prairie bordered by native burr oak forest in the Loess Hills outside Council Bluffs, Iowa. His studio overlooks wetlands he created for wildlife diversity and scenic beauty. Public school classes have come to paint out of doors with him. His favorite pastimes include hunting and fly fishing with his beloved bird dogs, Phoebe and Robin.
Once, as Peters was painting a sketch in Morocco, robed and bearded men crowded round. One man asked him if what he was doing was difficult, and Andy replied that painting in this way was indeed demanding. They watched. After a while another man said, “It is the work of the heart. The hardest kind of work there is. All the world knows it.” 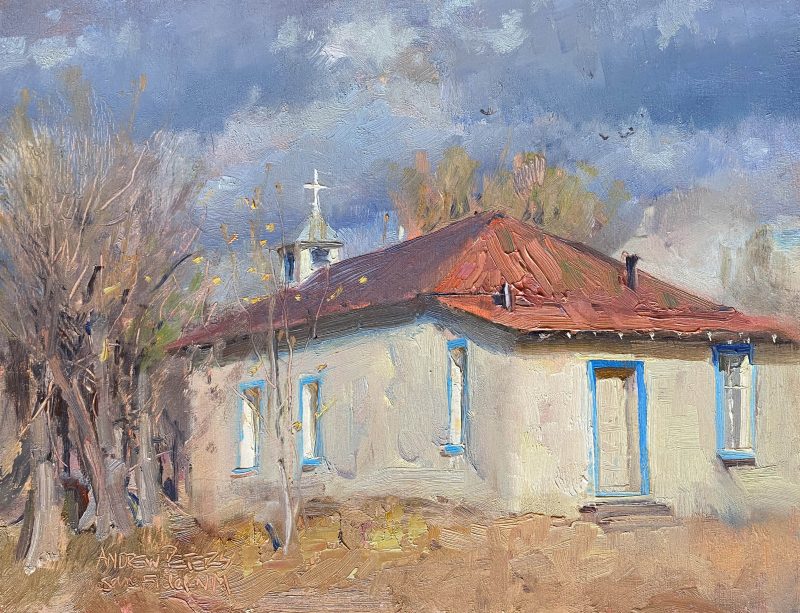 See additional information about “Before The Storm”. 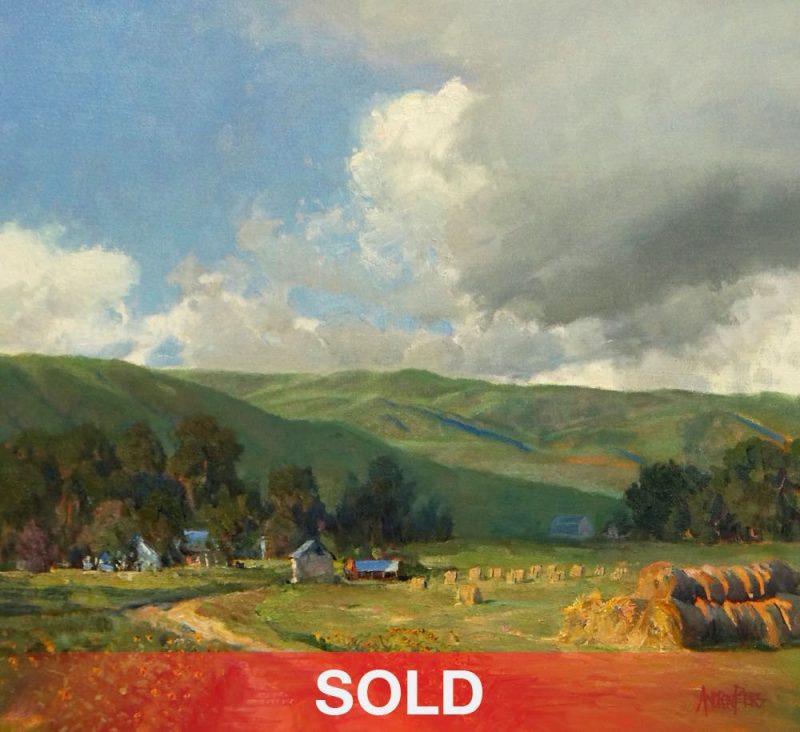 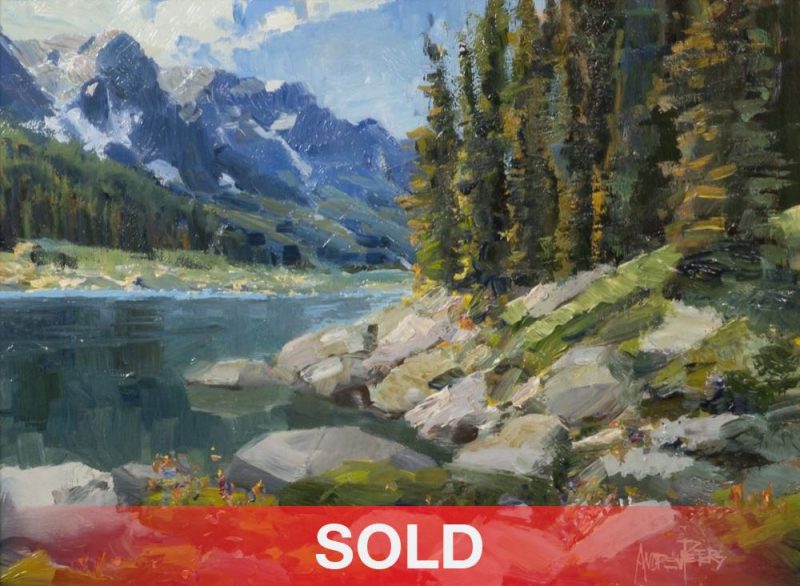 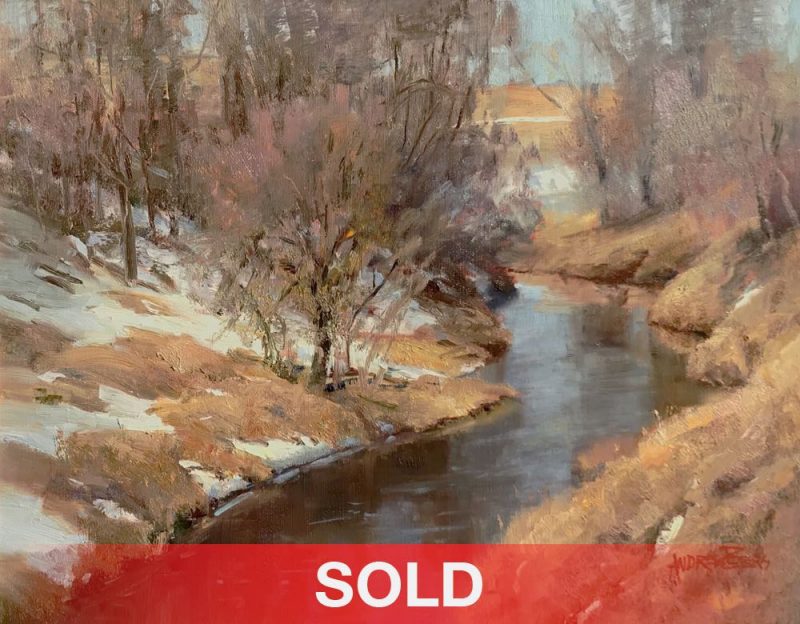 Museum Collections and more:
Andrew Peters’ work is found in the permanent collections of the National Cowboy & Western Heritage Museum, Oklahoma City, Oklahoma and the Great Plains Art Museum, University of Nebraska, Lincoln, where he was the first Artist-in-Residence. The Autry Museum Of The American West, National Museum of Wildlife Art, Cincinnati Museum Center, and Colorado History Museum have featured his work, and his paintings also appear in the book Painters of Grand Teton National Park by Donna L. and James Poulton (Gibbs Smith, 2015).