Brenda Murphy has a love for the West it is evident in her sensitively rendered drawings of horses, cowboys and ranch life. She’s a multi-award winning artist who achieved a Bachelor of Fine Arts Degree from the University of Texas at Arlington then worked for years in graphic design and illustration.  From this foundation she moved on to establish a career in fine art, exhibiting in top galleries throughout the west.

Born and raised in Texas, Brenda fosters a close relationship with area ranchers who provide inspiration, resources and a valued critical eye to insure authenticity in her work.  She and her husband, Tom, reside in Arlington, Texas where she maintains a studio in her home. 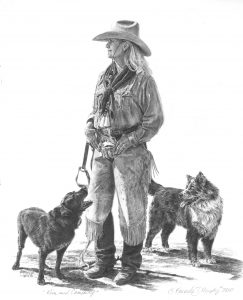