Harvey’s father was Burt Johnson, a noted sculptor whose death at the age of 37 cut short a very promising career. One of Harvey’s earliest memories relating to his desire to become an artist was at the age of six, modeling with the scraps of clay from the large piece on which his dad was working shortly before he died.

When Harvey was in the eighth grade, living in New York City, he entered a citywide art contest, which he won. Even then he was leaning toward the subjects that would shape his career. He drew an Indian being shot off his horse. In high school his talent continued to emerge and he became “artist in residence”. He was named art editor of the school literary magazine when he was just a freshman.

When he returned from World War II, after over three years in the army, he enrolled at the Art Students League, like his mother and father before him. He studied under Robert Johnson and Howard Trafton. After art school he worked in a number of studios and advertising agencies. It was there he met his wife Ilse who has been his biggest fan and supporter for over fifty years. She managed the business end of HWJ Inc., raised three sons and kept the house.

After their marriage they moved to Connecticut where Harvey landed a job with a home study correspondence school called The Famous Artists School. He worked there for over 19 years. Harvey’s oldest son Scott Lee Johnson, is a sculptor who still lives and works in Connecticut. Middle son Daniel is a writer living in Colorado. Glenn, the youngest, also lives in Connecticut and works at a children’s services agency as a supervisor in charge of training.

Harvey fell in love with the old West while doing freelance illustrations for the early pulp magazines. Many of the stories that he was illustrating were of frontier life. Always a stickler for detail, Harvey started to research the fine points of each story. He read about the types of guns and saddles that were used, the way a holster was made and worn and the geography of the areas in which they took place. The more he studied the more interested he became.

He started doing studies in oil paint. He acquired more reference books and began to collect artifacts from that time period. He took the family on vacation trips to the places where his paintings would have taken place to photograph the landscape. On these trips he would also find more artifacts and props that he could use in his work. He also photographed many Native Americans that he met on the reservations he visited.

In 1966 he was reading a copy of “Western Horseman” magazine and saw an ad for artists. They were in the process of forming a group of like-minded artists who portrayed the west. He sent them some pictures of his work and soon became one of the charter members of the “Cowboy Artists of America”. His relationships with the other CA members, their annual trail ride, and the annual show became a major focus in Harvey’s life for the next 33 years. In 1976, he served as their vice president and in 1977 as their president. His painting “Hideboat Express” was awarded the silver medal for oil paintings at the 13th Annual Exhibition in 1978 and “Trouble On The Rio Del Norte” captured the 1979 silver.

Harvey’s paintings have been purchased by collectors in 35 states, Europe, Mexico and Canada. One painting hung in Arizona Governor Bruce Babbitt’s office for two years and in the American embassy in Paris for two years. The “Apprehension of the Stage Robbers” was commissioned by the city of Albuquerque in 1992 and hangs in the city council chambers. His paintings are on permanent exhibition in the CA Museum in Kerrville, Texas.

Harvey painted on and off after 1994 but due to some bouts of ill health he had to retire from painting. Harvey passed away in 2005. 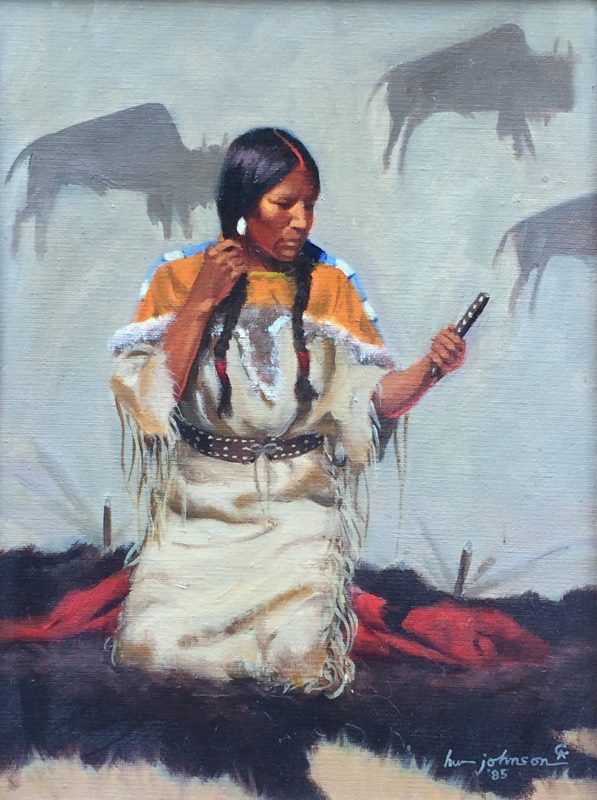