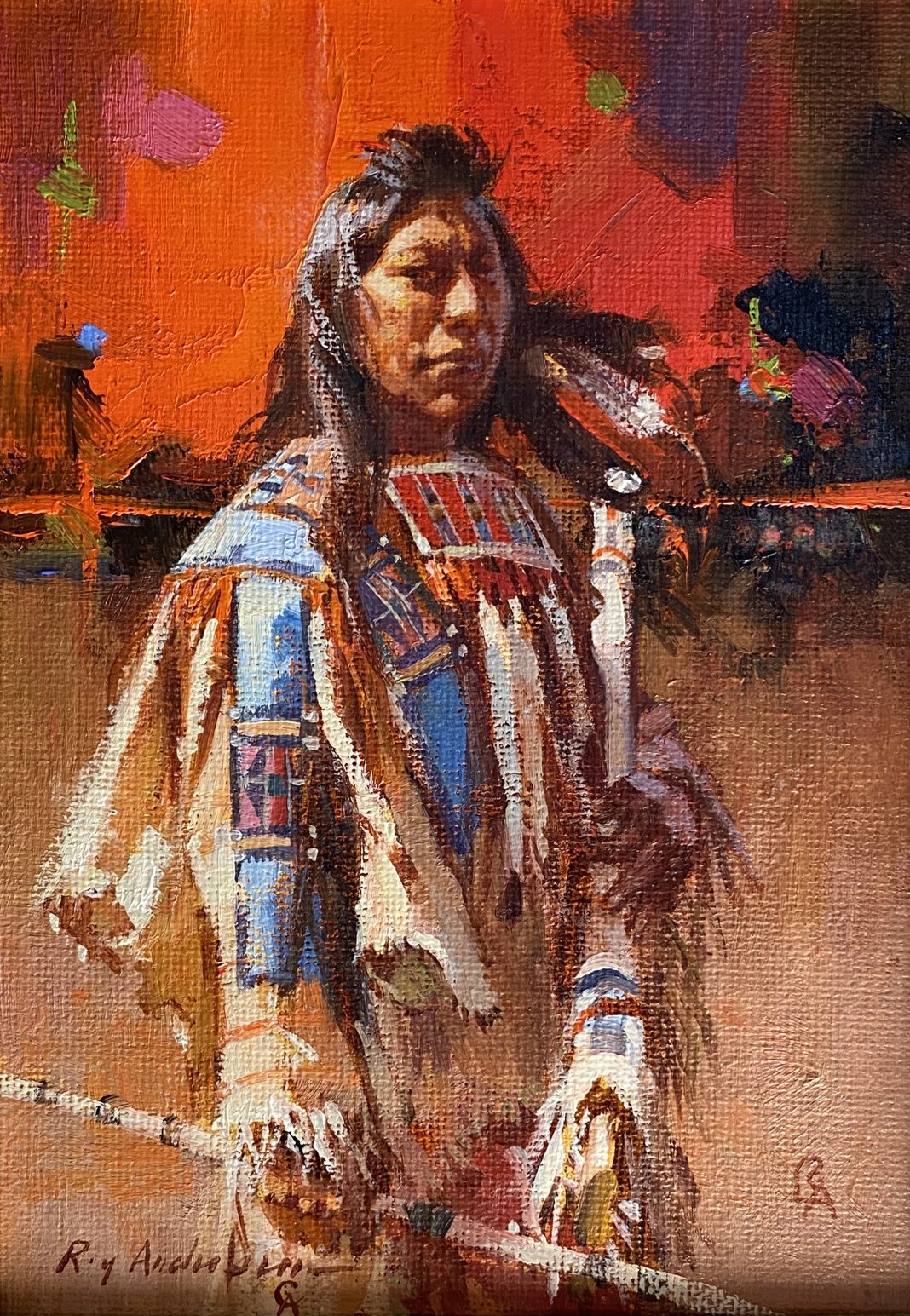 Known as a western painter, Roy Andersen did paintings of Crow, Cheyenne, and Apache Indians.  He began his career living in Chicago and New York and working as an illustrator.  He did numerous covers for Time Magazine including portraits of Albert Einstein and Prince Fahd.  He also did illustrations for National Geographic magazine, and did a stamp series on Dogs and American Horses, and in 1984 and 1985, won Stamp of the Year Award.  As a muralist, he has filled commissions for the National Park Service, the Royal Saudi Naval Headquarters, and the E.E. Fogelson Vistor Center at Pecos National Monument in New Mexico.

To pursue his talent for painting, Roy Anderson went West, living in Arizona and settling in Cave Creek.  In 1990, he was voted official artist for Scottsdale’s Parada del Sol, the “world’s largest” horse-drawn parade commemorating the Old West.

Andersen grew up on an apple farm in New Hampshire and learned about Indian customs from his many hours spent at the Chicago Museum of Natural History.  He is meticulous about being historically accurate in his paintings.  Of him it was written:  “There are no ‘happy accidents’ in an Andersen painting.  He has a knowledge of his subject that is attained only through extensive research.  You will not find an Apache medicine bag around a Sioux warrior’s neck nor a Cheyenne carrying a rifle that is a bit too ‘modern’.  What you will see is accuracy, an almost uncanny sense of composition and color harmony and a strength of drawing that is remarkable. ” (Dickerson)

His training is from the Chicago Academy of Fine Art and the Art Center School of Los Angeles.

Influenced by a cowboy uncle from Nebraska, he often painted cowboy scenes that his art teachers said were passe. For thirty years, he was an illustrator for National Geographic, Time magazine and Sports Illustrated and lived in New York and Chicago.

And then he “went West looking for peace and a place where he could be his own man in both his life and his art” (Prix de West, 14). He lived in Arizona and Texas.  In 1989, he was voted into membership into the Cowboy Artists of America, a group from whom he has received recognition at the annual exhibitions:  Oil Painting Award, Silver, 1999 and Drawing and Other Media, Silver, 2000. 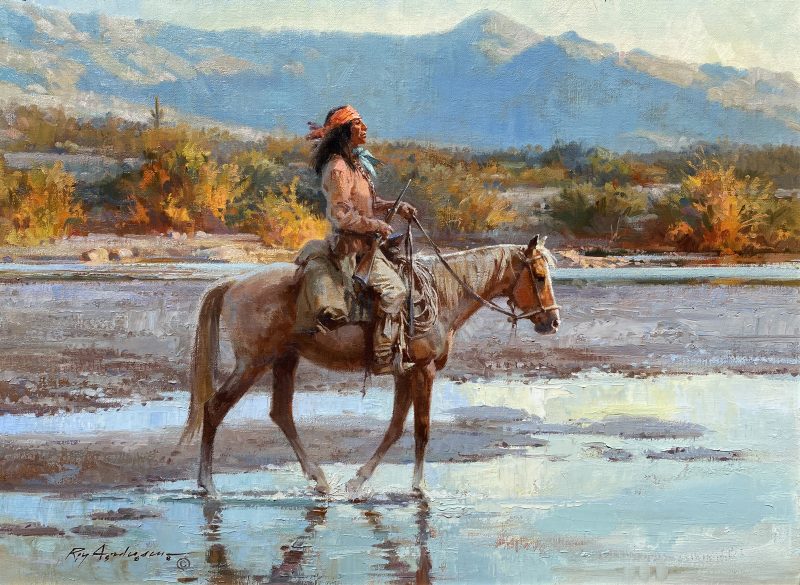 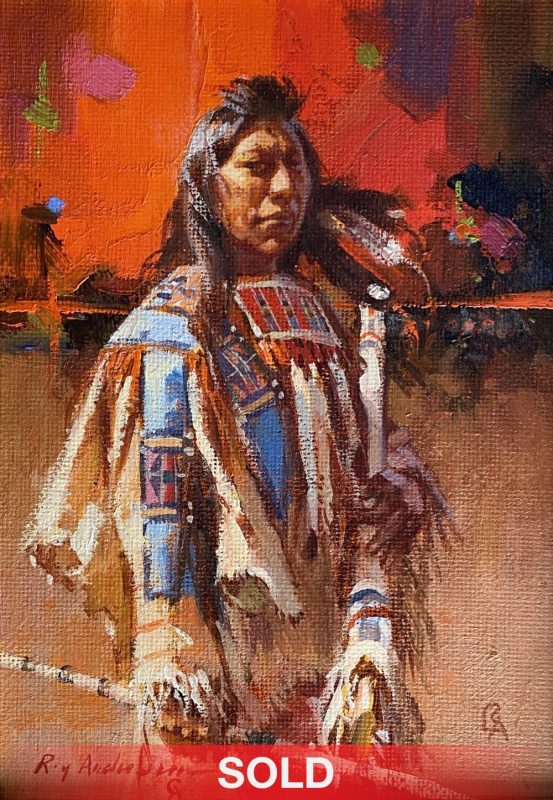 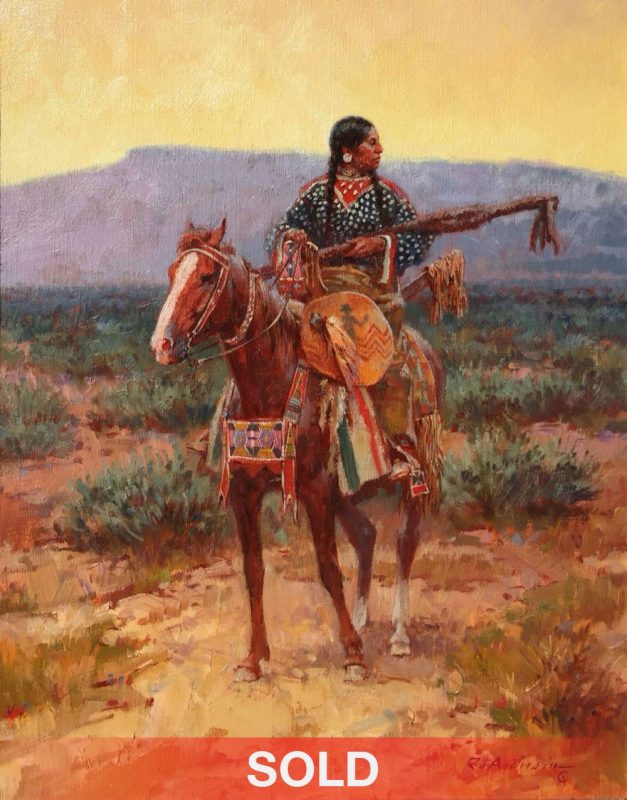 Do you have a Roy Andersen painting you would like to sell? We have clients interested in adding his artwork to their collections. Call us 800-958-5360 or email us sales@artzline.com.